One lead ECG as a biometric signal for human identification 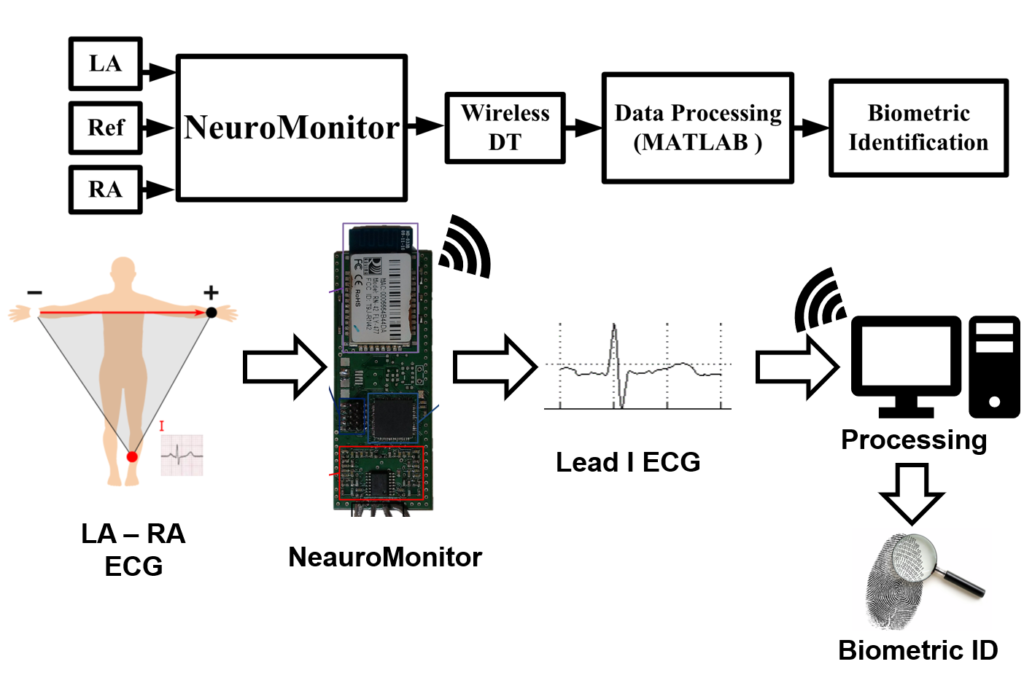 The electrocardiogram (ECG), widely known as a cardiac diagnostic signal, has recently been proposed for biometric identification of individuals; however reliability and reproducibility are of research interest. In this paper, we propose a template matching technique with 12 features using logistic regression classifier that achieved high reliability and identification accuracy. Non invasive ECG signals were captured using our custom-built ambulatory EEG/ECG embedded device (NeuroMonitor). ECG data were collected from healthy subjects (10), between 25-35 years, for 10 seconds per trial. The number of trials from each subject was 10. From each trial, only 0.58 seconds of Lead I ECG data were used as template. 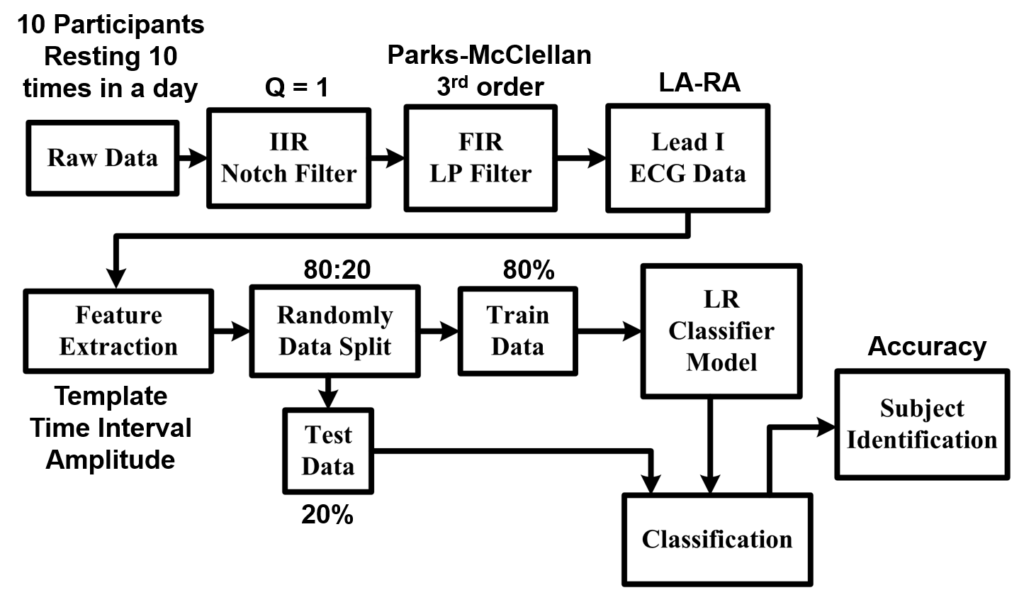 Hardware-efficient fiducial point detection technique was implemented for feature extraction. To obtain repeated random sub-sampling validation, data were randomly separated into training and testing sets at a ratio of 80:20. Test data were used to find the classification accuracy. 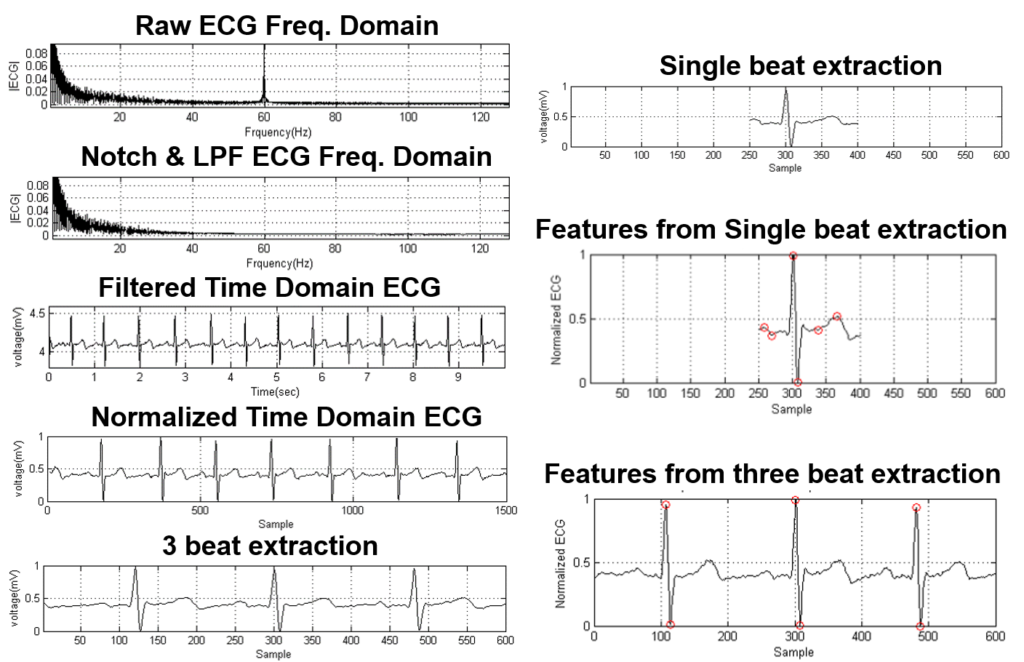 ECG template data with 12 extracted features provided the best performance in terms of accuracy (up to 100%) and processing complexity (computation time of 1.2ms). This work shows that a single limb (Lead I) ECG can robustly identify an individual quickly and reliably with minimal contact and data processing using the proposed algorithm. 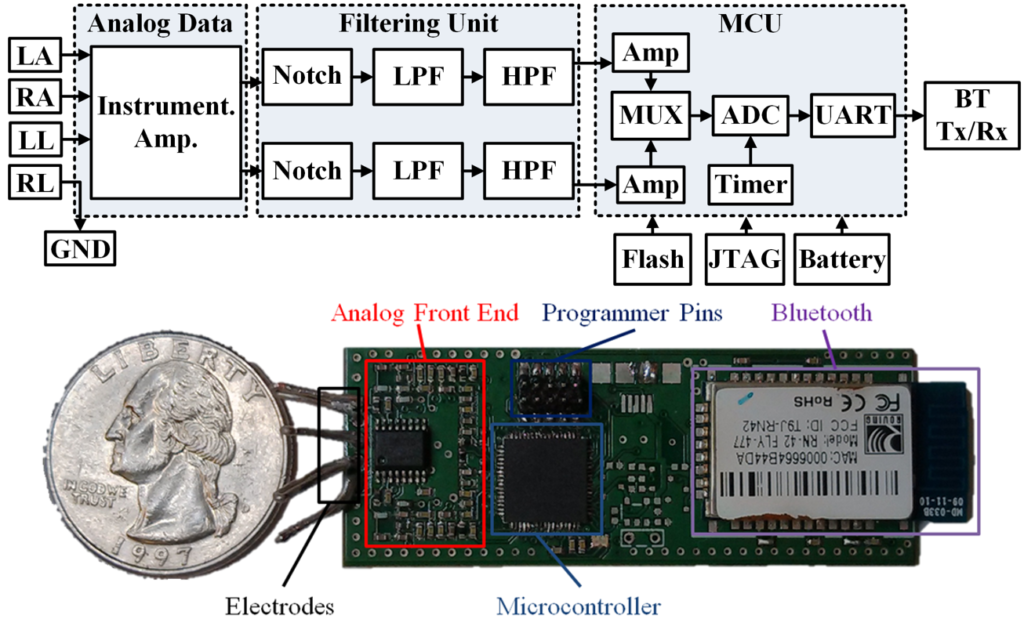 Neuronal firings generate tiny electrical potentials as information is transmitted via neurotransmitter in synaptic bulb. Scalp EEG can monitor such collective activities as oscillatory waves that relates to the mental states, cognitive loads, stimulations and perceptions. The developed system was realized through hardware-software co-design that allows us to record such EEG activities of the brain from the prefrontal cortex through the device in a natural setting during regular activities. The system composes of 4-stage biopotential amplifier with active analog filtering, 16b ADC on PSoC3 micro-controller, along with other peripherals and power management circuits. The hardware is miniature (size: 2.2” x 0.8” x 0.36”, weight: 41.8 gm with 800 mAh Li-ion battery and 3 snap leads) such that it can be concealed within a headband. The collected data can be wirelessly transmitted for on-line monitoring or stored on-board for offline analysis, and allows co-processing of multimodal sensing with contextual perspective.

Application areas we are currently actively pursuing are engagement study of children with developmental delays (ASD, ADHD, cerebral palsy), generalized or partial seizure detection and advisory system for epileptic patients, and real-time monitoring of Alzheimer’s, TBI, PTSD or other neurological disorders in natural settings. The platform might be suitable for other BCI studies including thought control computing, or electronic mental health monitoring.

The AC electro-kinetic (ACEK) force generated from electrical excitation is a factor influencing this phenomenon. Temperature rise was not significant as demonstrated in both simulations and experiments. Different control and stimulus experiments were performed to show the concepts of dye release from micro beads using electrical stimuli.

Dye release has been identified visually for these experiments. Chitosan films loaded with green food coloring were also fabricated to demonstrate the drug release. Experiments were conducted with different electric fields and frequencies on chitosan fi?lm. The spectral absorbance of treated solution after the experiment is measured using a spectrophotometer to quantify the dye release. Verification of the dye release with increased applied voltage was statistically proven with 99% level of significance. This study has shown that application of electric field can be a potential candidate for controlled DDS using both chitosan micro-beads/films.

A vertically aligned carbon nanotube-based sensor was invented in 2015 during my MS at the University of Memphis. The left top figure is showing the sensor. The functionality of the sensor is verified using agar gel human skin emulator and compared with existing sensor GS26 widely used for ECG data collection. The right top figure is showing the received signal from the invented CNT vs. GS26 sensors.